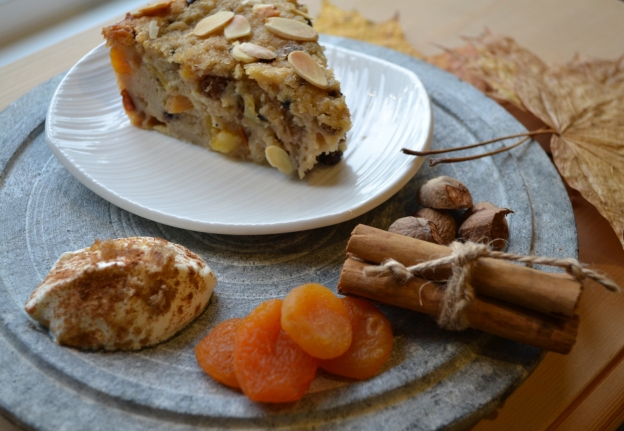 This is a Marguerite Patten inspired recipe I created in honour of what would have been her 100th Birthday today, Happy Birthday.  I wanted to make a version of bread pudding that was similar to Marguerite’s Viennoise Pudding, in that the texture is light and less stodgy.  I also wanted it to be an easy recipe to attract the attention of beginners and students alike.  I used an oven-proof oval (32cm x 20cm x 7cm) deep dish to bake the pudding in. If you don’t have an oval dish, a square or round dish will do as long as long as has a 2 litre capacity.   If you are unsure just use a measuring jug fill your baking dish with cold water to find out it’s capacity. For my American readers 2 litres is about 11 cups.

To serve
You can serve warm with Creme Fraiche or custard or on its own.

*Chef’s Notes
Use the dried fruit you have to hand.  I didn’t have enough dried mixed fruit, so I added some dried (chopped) apricots. Equally, I could have also made up the shortfall with some prunes or other dried fruit such as apple.  The whole point is bread pudding, is a great dish to use up the ingredients you have.

When my loaf is too dry to make sandwiches or I have too much to use up as toast, then I wrap it well in a couple of plastic bags (one inside the other) and freeze it for later use as bread pudding or even breadcrumbs.  You could also use cream instead of milk if you happen to have some that needs using up.